Over the past 40 years, David Bryant has been defined as a “messenger of hope” and a “Christ proclaimer” to the Church throughout the world. 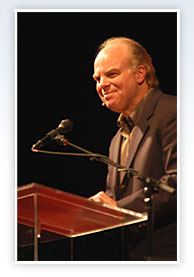 Formerly a pastor, minister-at-large with the InterVarsity Christian Fellowship, president of Concerts of Prayer International (COPI), and chairman of America’s National Prayer Committee, today David provides leadership to Proclaim Hope! whose mission is to foster and serve a nationwide Christ-awakening movement.

Among his writings, six books are key:

Christ Is NOW! 7 Groundbreaking Keys to Help You Explore and Experience the Spectacular Supremacy of God’s Son Today

Christ Is ALL! Join in the Joyful Awakening to the Supremacy of God’s Son (revised)

In the Gap: What It Means to Be a World Christian

With Concerts of Prayer: Christians United for Spiritual Awakening and World Evangelization

The Hope at Hand: National and World Revival for the 21st Century

Messengers of Hope: Becoming Agents of Revival for the 21st Century

All these books are featured at DavidBryantBooks.com.

Since 2010, David has pursued an ambitious outreach to encourage a nationwide Christ Awakening movement, which is defined as “The whole Church becoming wholly alive to the whole vision of the whole Christ.”

To strengthen this movement, David has created an in-depth learning experience called The Christ Institutes (TCI). The goal of its extensive teaching is to help Christians gain a much larger vision of who Jesus is right now—what he’s doing, where he’s headed, and how believers are transformed by living in the fullness of his supremacy.

TCI has been professionally filmed and is now offered online at no charge as a nine-session course called The Christ Institutes Video Series (TCIVS). A follow-up companion to the TCI course is Christ Is ALL! (over 500,000 Mandarin versions alone are being used to train Chinese church leaders).

As another way to foster Christ Awakening movements, David and his team have spearheaded the first-ever website of its kind, ChristNow.com. There’s nothing else like it anywhere on the web today.

ChristNow.com provides a central hub for ever-expanding, free resources from every stream of the Church. It offers teaching and worship videos on many aspects of Christ’s glory and reign, video testimonies about personal awakenings to Christ, regular blog posts and audio devotions on our Lord’s reigning majesty—and so much more. For example, there’s a free, nine-week daily email and video series to guide Christians in spending a few minutes a day focused on growing a larger vision of Christ.

Every day the impact of ChristNow.com reaches a growing number of followers across the nation and globe through Facebook, Instagram, and Twitter, as well as the free ChristNow app.

Recently, New Providence Publishers published David’s “magnum opus,” Christ Is NOW! Incorporating decades of research, this 640-page hardback is enlivened with full-color graphics and over 125 photos throughout. What makes the book so unique is its express purpose of helping readers explore and experience in new ways the supremacy of Christ and who he is today. As its front cover tagline puts it: “Meet Him Again for the First Time!”

David and his wife, Robyne, were high school sweethearts in their hometown of Massillon, Ohio. They now call metropolitan New York City their home. Their three grown children, Adam, Bethany, and Benjamin, were adopted as infants from India.