There is a growing crisis inside the Church. Fundamentally, in much of the American church today the Lord Jesus Christ has ceased to be the supreme focus of His people. Many call this a “crisis of Christology”. Jesus is treated more like a “mascot” than a Monarch.

Christians today are occupied with many agendas – political, social, cultural, relational and congregational (one recent study outlined 29 major issues about which millions of believers are currently concerned). But in the process our vision of God’s Son remains too small. This spiritual myopia fails to produce the overriding, consuming passion for Christ that would move Christians to join Him in accelerating new advances of His Kingdom in this generation.

many evangelical churches are actually promoting, often unconsciously, a form of “moralistic, therapeutic Deism, with Christ left at the fringes.”

Theologian J. I. Packer suggests that the Church’s current experience of its Lord could be illustrated by Humpty Dumpty: our “Christology” has broken into a hundred pieces. Everyone has a piece of who He is, but very few are trying to put the pieces back together.

Richard Fox of Yale University observes that evangelicals have created a “pantheon of Jesuses” from which we pick and choose the one we need based on felt needs.

Chuck Colson says that our churches have become “retail outlets”, with members as “consumers” and Jesus as the “product”.

One of the nation’s leading pastors wrote recently: “The reason the Church is having so little impact on our nation is because Christ is having so little impact on His Church.”
No wonder the George Barna Group summarized recent demographic research this way: “Overall, Christian ministry is stuck in a deep rut. Too many Christians and churches in America have traded in spiritual passion for empty rituals, clever methods and mindless practices. The challenge to today’s Church is not methodological. It is the challenge to resuscitate the spiritual passion and fervor of the nation’s Christians.”

The American Church Research Project concurs (2008): “In reality the church in America is not booming. It is in crisis. Its renewal and restoration must begin with an awe-inspiring encounter with Jesus Christ – the crucified, resurrected and ascended Messiah and Lord. Returning to Jesus as our central focus is critical to the health and growth of missional churches.”

Many of us need to be awakened to a renewed vision of the greatness and glory of the person of God’s Son. To be “Person-driven” makes one “promise-driven”, then “passion-driven”, and then “purpose-driven”.  But when Christ’s Person is not exalted among us for ALL that He is, then believers often find themselves exhausted trying to serve His purposes.

We have one great hope in the face of this core “crisis of Christology”. It is what PROCLAIM HOPE! describes as a “nationwide Christ-awakening movement”.  Let’s define the terms.

A “Christ Awakening” (as we define it) takes place whenever “God’s Spirit uses God’s Word to reintroduce God’s people back to God’s Son for ALL He is.”

Historically, we know that such a fresh work of the Holy Spirit results in measurable changes, first of all for believers, their churches and their outreaches. Out of those transformations, however, come increased advances of Christ’s Kingdom within the culture at large as well as among the nations. Whenever Christians wake-up to fresh hope, passion, prayer and mission focused on the full extent of the supremacy of Christ, they are seen to rise-up to serve the King of Glory in whole new ways.

Calling it “nationwide” indicates that Christ-awakenings can become God’s gift to all streams of the Church throughout a nation (and thus able to impact the life of a nation as a whole).

Calling it a “movement” highlights how Christ-awakenings spread from individuals to individuals, churches to churches, cities to cities, even one region to another.

The term “reintroduce” points to the change of heart and mind every Christ-awakening brings, as God’s Spirit uses God’s Word to turn God’s people around and move them toward a fresh encounter with God’s Son.

This requires a unique paradigm shift in worldview. As vital as it is, we no longer stop with the truth of the “centrality of Christ” – that is, His right to be at the center of who we are, where we are headed, what we are doing, and how we get blessed. Instead, now our outlook on everything is shaped by the grander truth of the “supremacy of Christ”. Here roles are reversed. Believers build their lives in Christ based on His right to keep us at the center of who HE is, where HE is headed, what HE is doing and how He gets blessed.

Which is why God-initiated awakenings always arise, in no small measure, from the sustained efforts of (what PROCLAIM HOPE! calls) “Messengers of Hope” – clergy and lay leaders alike – who spread within their spheres of influence biblical truths and promises focused Christ’s majesty and supremacy. Proclaiming at every opportunity the ascension of Christ and His on-going, redeeming reign right now, Messengers of Hope stir fellow Christians to be re-converted back to God’s Son for ALL that He is. Their efforts are key not only to igniting but also sustaining any emerging Christ-awakening movement.

This is the heart of the vision and mission of PROCLAIM HOPE! – warning God’s people of this deadly “crisis”, inviting them to awake to Christ and the full extent of His supremacy and helping them make this fundamental “re-conversion” back to Him as the Redeemer Lord that He is. 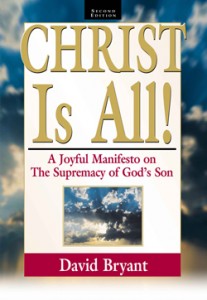